What to make of all this fuss around the sale of anti-English World Cup merchandise. It seems the Scots have been entertaining themselves by buying t-shirts with ‘Anyone But England’ emblazoned across them. 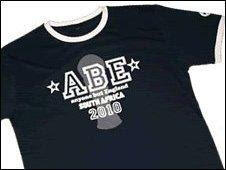 The offending t-shirt: would look quite stylish on a Scot

Well they need something to do in addition to twiddling their thumbs because their team yet again failed to quality for the finals. Apparently these t-shirts have been selling in their thousands and the situation has even reached the point where the Police have been called in to investigate whether selling such merchandise is an act of racism.

HMV has been among the retailers defending themselves and been forced to take them out of stores in Scotland. It’s a shame they’ve been pushed into this position because as an Englishmen I couldn’t care less whether they sell such clothing. I couldn’t actually care what the Scots do during the World Cup.

This is because the t-shirts highlight the fact that whereas they seem to be obsessed about England, we’re completely indifferent to what they do. Let them do what they like and see if we care.