The recession and growth of the internet have had a big impact on shop lettings, which has resulted in 13% of units in shopping areas now vacant (voids), according to the Local Data Company (LDC). 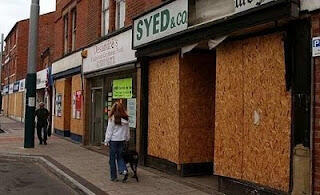 Empty shops: coming to a high street like yours, and staying.

The situation could be even worse than that for landlords when you consider that without charity shops then another 5% could be added to the voids level.

The LDC found that the voids level of 13% for 2010 represented a significant rise from the 10.5% of last year, thereby pretty much confirming the widely held view that things will get worse before they get better for retailers.

The killer question with regard to shop lettings is whether they will in fact get better again in our lifetimes?

With approaching 10% of total retail sales now conducted online why would retailers need more shops? Making things worse is that alternative uses for the vacant shops – banking, travel and betting – relate to sectors that are all having their own issues with trade increasingly going online.

Indicative of the growing problems was the comment of Ralph Topping, chief executive of William Hill, who recently suggested (FT July 31/August 1) that betting shop numbers would likely fall from 9,000 to 7,500. This is all sapping demand for shops and leading to the question of how many do we actually need?

Not even William Hill can save us.

The Centre for Retail Research calculates that we have 300,000 shop units in the UK at present and suggests that by 2013 (when we will likely emerge fully from the recession) it will be clear that there are between 5% and 10% too many shops. I don’t need a calculator to work out that this equates to as many as 30,000 unwanted stores.

For those people who still like to stroll down a high street to shop rather than sit in front of a PC this will make rather sad and worrying reading. But it just might be the case that this is the new reality for retail and we’d all better get used to it asap.