Brought to you by Retail Insider and PCMS Group

The Place: Basically an online family business based in Devon with 350 staff and a big warehouse. But also boasting one stupendous shop in Carnaby Street, W1. 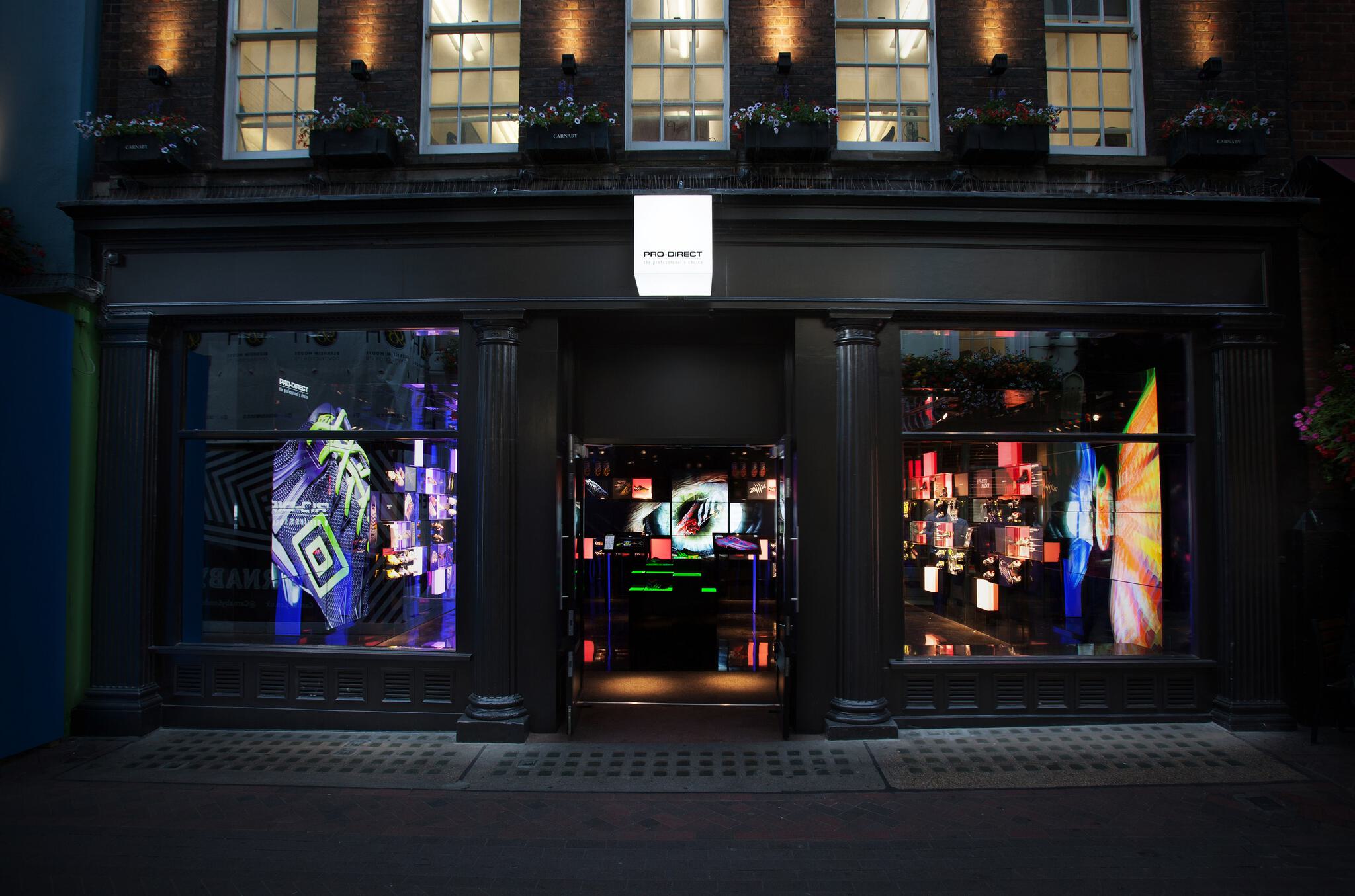 The Story: Ah, websites and shops. How to integrate them. One of the great retail questions of the day.

Is it? Yes. Often there will be a shop first, which then feels it really has to have a website. Or you have just online and stay that way because shops look like hard work. But Pro Direct has taken an interesting route to multi-channel.

Has it? Yes. And what they have done is to turn their sole shop into a walk-in website, which is the talk of Carnaby Street, nay the town, nay the whole country with a clutch of design awards under its belt already and 27% year-on-year growth. It’s a result of some exemplary work undertaken by  agency Green Room Design. It’s certainly a long way away from the Boot Bible mail order business they were in 1999.

Is it? Can you stop saying that now? Pro Direct is primarily a football-focused sports retailer, which also has lines from other sports including cricket, basketball, rugby and tennis. But selling football boots is what its DNA is all about. Now lots of retailers are quite good at harnessing social media and interactive content/real time news for their online presence but there is virtually none of it in-store. And the content and imagery inside the shop is all produced by the brands. Think of your average sports retailer.

I am: Rows and rows of boots on a shelf. Probably not even all the top brands because of complex licensing arrangements and a few posters of football stars kicking balls along with the Saturday shop boy who knows nothing about what you might need in a football boot.

I’m not sure I know what I need in a football boot: Now I’m going to amp-up the Pro Direct shop. Go there if manz boots are crutterz and the Sports Direct deals are ginuls. Pro Direct content is off the hook.

Sorry? Yes, because when you hang with your mandem in Pro Direct you have to be bayden because it is full of the beast.

I literally have no idea what you are talking about: Oh for goodness sake, I mean the key demographic is 14-25 year olds and if you want to talk to them in their language then via Instagram is the way to do it and repurposing content from website to shop is also super effective. At least I think that’s what I said.

Please don’t do that again, it’s distressing: It’s exhausting actually. I am going to stick with the words of Ned Ozkasim instead.

Who he? Comms and events manager for Pro Direct Sport. According to Ned Pro Direct is one of only four accounts worldwide that can sell the boots for Adidas, Puma and Nike.

Impressive: And the store has one thousand pairs of boots in it which could look really, really dull. But the store’s content, branding, flooring, in fact everything in it can change as many times as a teenager checks his Facebook account.

You’re doing it again: Sorry. In a nutshell if you go into the shop on a Monday and again on Friday you can expect it to look completely different. Wall content is projected onto panels, which form part of a flexible grid system, touch screens constantly change, there are magnetic graphics, and interactive digital mannequins so you can see what the gear looks like on. There is constant real time uploads from customers with reviews while at certain times like transfer deadlines, breaking news stories will be beamed up all over the shop creating the kind of buzz that other retailers can only dream of.

Blimey: The boots have codes on them, which will take you to the boot’s webpage for more information on the product, the interchangeable graphics panels allow for the telling of a small story using just a few of them, or a whole floor takeover featuring the same content for a larger slice of the action or an entire store full-on big launch with bells on featuring Pele sort of a thing. When Geoff Hurst came they laid the whole shop out with Astroturf.

Ok, Ok. I’m sensually overloaded. Talk about something else: Let me tell you about the one thing Ned says they haven’t been able to do. The original intention for this shop window for the online business was to hold no stock at all.

No way: Yes way. They wanted to change the whole mentality of shopping – people would go in, buy, but not take away the product – the goods would be delivered direct to the house wherever the house might be in the world.

I feel a but coming on… but they didn’t reckon on the good old fashioned ‘I want it NOW’ scenario. As Mr Ozkasim notes there are two opposing demographics at play here. The buyers (parents) and the consumers (offspring) and you can guess who wins out when I tell you that 90% of sales are takeout. Parents don’t want to walk around central London encumbered with shoe boxes especially as the chances of playing football in Oxford Street are limited but those kids don’t trust the purchase unless it is in their hot little hands. 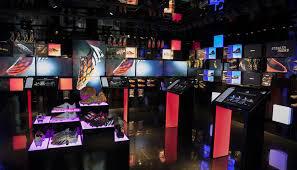 So young and yet so cynical: However, the free global delivery is quite a game changer, there are not many outlets offering anywhere near this flexibility so you can expect this statistic to change significantly as the children become the buyers.

Talking of buyers, who is visiting this shop? Dwell time is around 30 minutes per visit, maybe longer on a Saturday when a game will be screened live. There are high numbers of foreign tourists visiting as they recognise the shop is a global product showcase bar none and football is practically a world religion. They buy in store and have it delivered abroad, then their friends see and buy too direct from the nine localised websites. But because of the constant store changes locals come in for regular visits too, just to see what’s new.

Do they get many loiterers? Ned Ozkasim recognises that in the social media world everyone is an influencer and if you just come to look and tweet that you were there, then that can have a value for the business. So in other words if you come in and don’t buy that is kind of fine.

Conversion rates? Again, not massively tracked. Sales grow, convergence grows and as long as both are increasing then the shop is having a positive effect. A lot of people come in for the events side of things – there are four to five events a month often featuring pro stars or product launches so plenty of repeat visitors. Interestingly the store used to have three price brackets – £60 for the ‘good’ line, £110 for the ‘better’ category and £240 for the ‘best’. Guess which one they had to get rid of.

The expensive one, it’s austerity you know: You are so not down with this market. Obviously the cheap one got the boot – all the associations with events and in-store are with professional players (the strapline is ‘the professional’s choice’) and everyone knows they don’t wear £60 boots. In fact 75% of transactions are over £150.

Blimey: Literally everyone wants a piece of Pro Direct’s action. Brand owners are falling over themselves to outdo their competitors with bigger and better launches.  Also no surprise that Ozkasim spends a good part of his time meeting other leading retailers for visits to his store. Big name brands allow Pro Direct the final say on their products and how they are displayed in a way that most shops could not even conceive of. And finally 500 people applied for the 10 sales assistant roles.

PCMS is a global provider of IT software and services for the retail industry. PCMS offers a full-range of integrated commerce solutions across selling touch points and also provides turnkey managed services and cloud hosting. Its client list includes John Lewis, Marks & Spencer, Waitrose, Whole Foods, as well as Walgreens in the US and fashion brands including Prada and Ferragamo across Europe.

Posted in General and tagged General