Earlier this year Amazon opened its first Amazon Go store to the public, enabling shoppers in Seattle to pick goods off the shelf and leave. Cameras and scanners monitor the movements of each person and the goods they handle before automatically charging their account as they leave the shop with their items.

Amazon has trademarked this as “Just Walk Out” (JWO) shopping and it has sparked great activity around the world as retailers look to introduce similar customer-liberating shopping environments into their businesses. Tesco has just opened its first cashless store, which also involves a trial that allows people to walk out after they have used their mobile to self-scan all the items in their basket. The amount is then seamlessly debited from their account.

This is termed “frictionless” shopping, with all the pain points supposedly removed. What it can also translate into is “quicker” shopping. It takes us further on the journey we are all taking whereby we are given solutions to enable us to live life at a faster pace. Payments are at the heart of this, with contactless a central feature.

Growth in contactless payment has been phenomenal – at the cost of cash. In 2006 as many as 62% of all payments in the UK were made using cash but this had fallen to 40% in 2016. It is predicted it will fall to 21% by 2026, according to UK Finance. Even at JD Wetherspoon cash payments have succumbed to contactless, falling to 60% in 2016/17 as it follows a declining path of 5% per year.

My visits to coffee bars and pubs invariably don’t involve cash any more, and I find far less of it being processed around me. It is therefore not surprising a growing number of businesses in the leisure and hospitality sector are shunning cash and only accepting contactless – and other card – payments.

But even tapping a card on a reader is not fast enough it seems. The Oyster card system on London’s transport system set the ball rolling with contactless adoption in the UK but it is now investigating how it can potentially speed the process. This might involve the removal of gates, which cause far too many queues at peak times.

Businesses such as Vita Mojo were created as cashless models while others have adopted similar propositions, including Tossed. But they have also looked to take things on a step and enabled advance orders and payments on an app before collection is made at the restaurant.

Wagamama also found half of UK consumers are unwilling to wait longer than six minutes in a queue for food or hang around at other friction points such as waiting for a table or the bill. To address the latter it launched Wagamamago, the “world’s first walk-away payment app”. 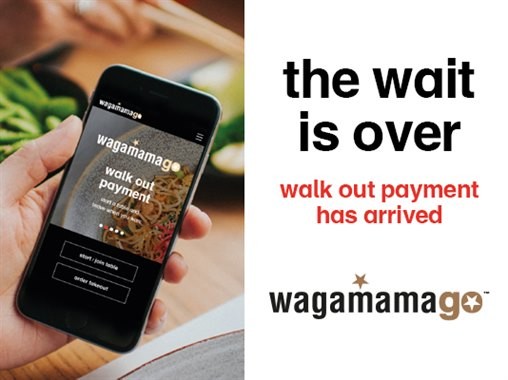 When diners enter the restaurant and open the app they are given a code, which is used at the till by staff when they enter the customer’s order. This synchronises the till with the customer’s phone and enables payment via their device and frees them to leave without having to ask for the bill.

To some people such advances will feel like hospitality is being stripped out of the hospitality industry but it has to be recognised it is still early days for many of these digital technology solutions. It is likely some equilibrium will be found in time whereby the technology disappears into the background and hospitality is to some extent redefined.

This piece was originally published on Propel Info where Glynn Davis writes a regular Friday opinion piece. Retail Insider would like to thank Propel for allowing the reproduction of this column.