Welcome to our brand new series of articles on those retailers who choose to concentrate only on one very specific product or expertise. In a world where so many are jacks of all trades – we meet the masters of one.

The Story: Lance Forman is the current head of a family firm that began with his great grandfather during the early 1900s in the East End of London where the company is still based. And the first thing he wants anyone to know is that smoked salmon is emphatically not a Scottish thing. When his relative first came to London from Russia, smoked salmon was not known at all. The Jewish emigres brought it with them and always used salmon imported from the Baltic. Smoking was simply a way of preserving the fish but before long great grandfather Harry and other purveyors noted that Scottish salmon was also very good. 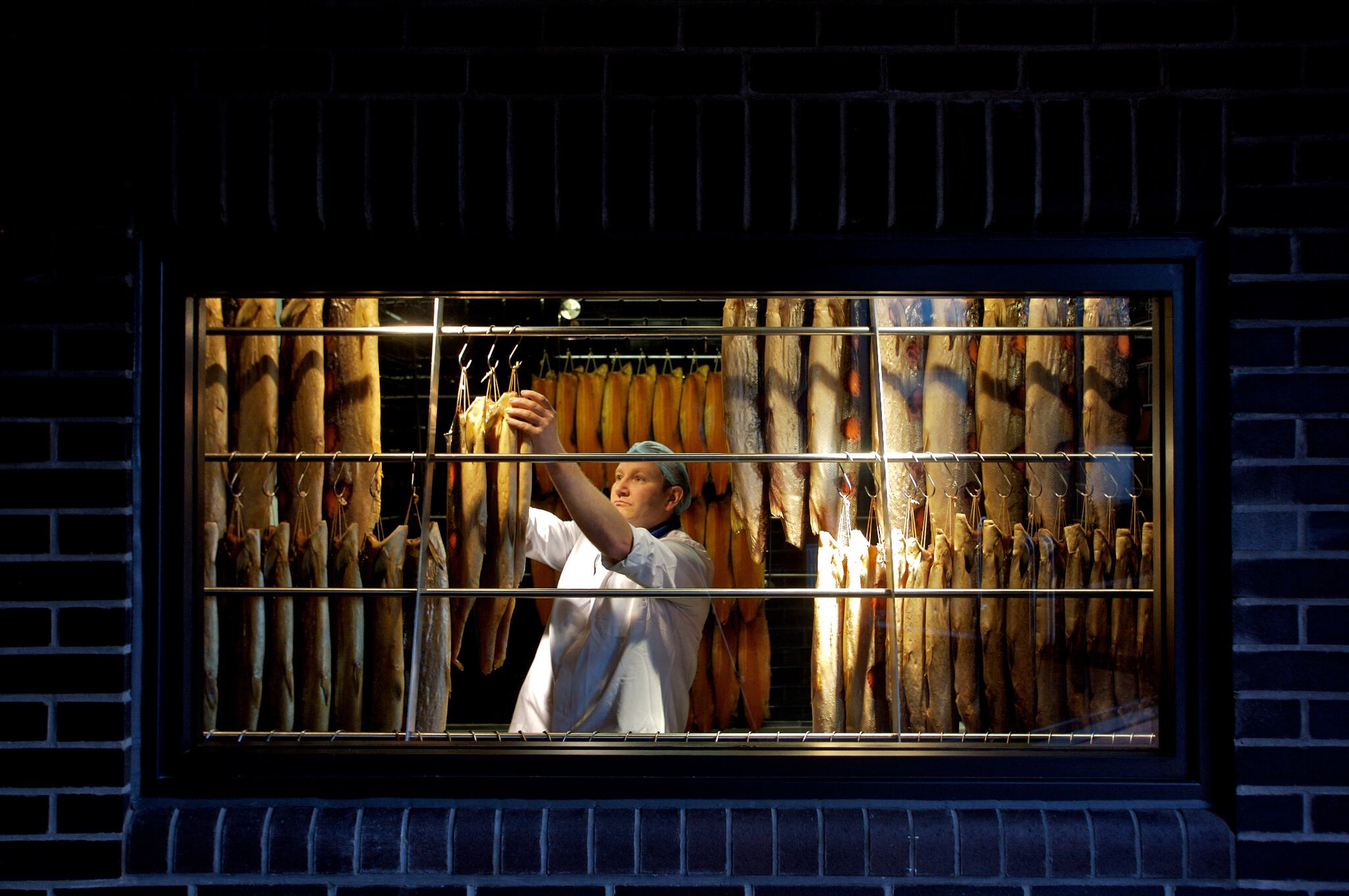 They began using UK fish, which obviously arrived much sooner. Sometime in the mid-70s smoked salmon began to be known as a gourmet food which sold for luxury prices and at that point the Scottish began to farm salmon in earnest and to set up smokeries too. The former centre of the salmon smoking trade in London now suffered badly as they could not compete and most died away. But H Forman & Son is still with us providing valuable lessons in how to survive and thrive as a specialist retailer.

The first thing he impresses during Retail Insider’s visit is that having realised that competing was pointless, the only thing left to the company was differentiation. Large scale mass-production of smoked salmon changed the product to a great extent and H Forman & Son now reaps the benefit of never having changed its production methods or tried to cut any economic corners. Its smokery tours are always sold out and people’s ever-increasing interest in the provenance of the food they eat fits neatly into the company’s heritage. 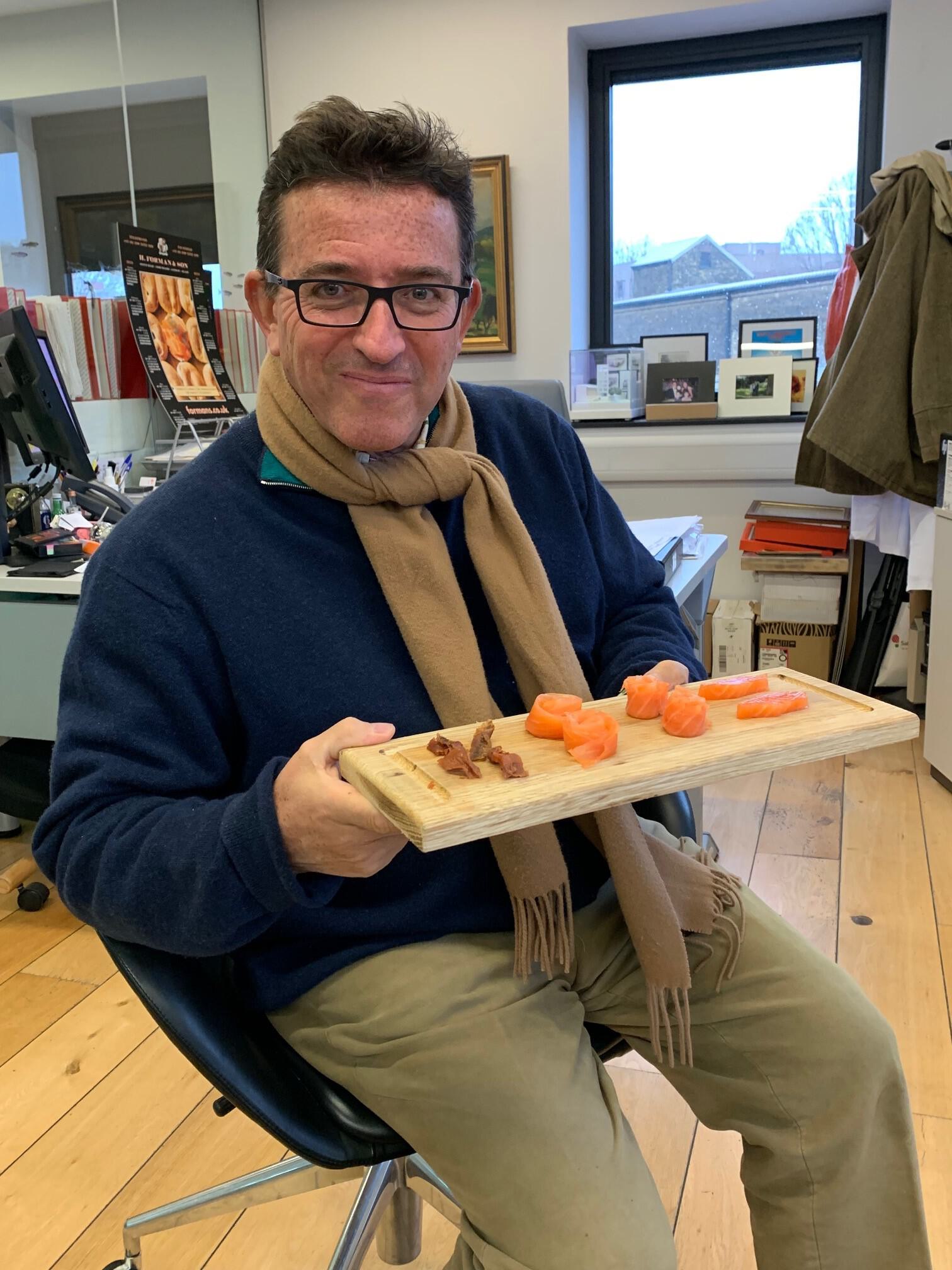 Lance Forman in his office

In fact Forman is fairly adamant that he actually has to re-educate people about smoked salmon. He notes that at consumer events people tell him that they don’t like it usually citing its ‘slimy texture’ and ‘too smoky taste’ as the main reasons. Mass production, he feels, has given the whole product a bad reputation in that the whole point of the process originally was to take moisture out in order to preserve it so that a slimy texture could never occur. He would rather people bought better and bought less.

His own products  are first sprinkled with salt and left for 24 hours which takes out  10% of the water (and weight) and concentrates the flavour, air-drying sees off another 10% (and more weight) and only then is the fish smoked. The smoke is used as a sealant only – the fish is not supposed to taste off smoke! Finally the outer crust is cut off (more weight loss again) and the fish is ready to consume.

As he explains he has by now lost 25% of the original weight of the fish and a sizeable chunk of the profit – putting him at a big cost disadvantage – one of the many challenges of being a specialist retailer in a market where others are not so scrupulous about their production.

H Forman & Son is a masterclass in the retail dichotomy of not cutting corners, having to charge high prices but ultimately being able to persuade the consumer that it is vastly superior to the cheaper products available. To ram the point home, the company achieved PGI status for London cure smoked salmon last year after five years of effort. He claims that it is the only protected food or drink product in London. 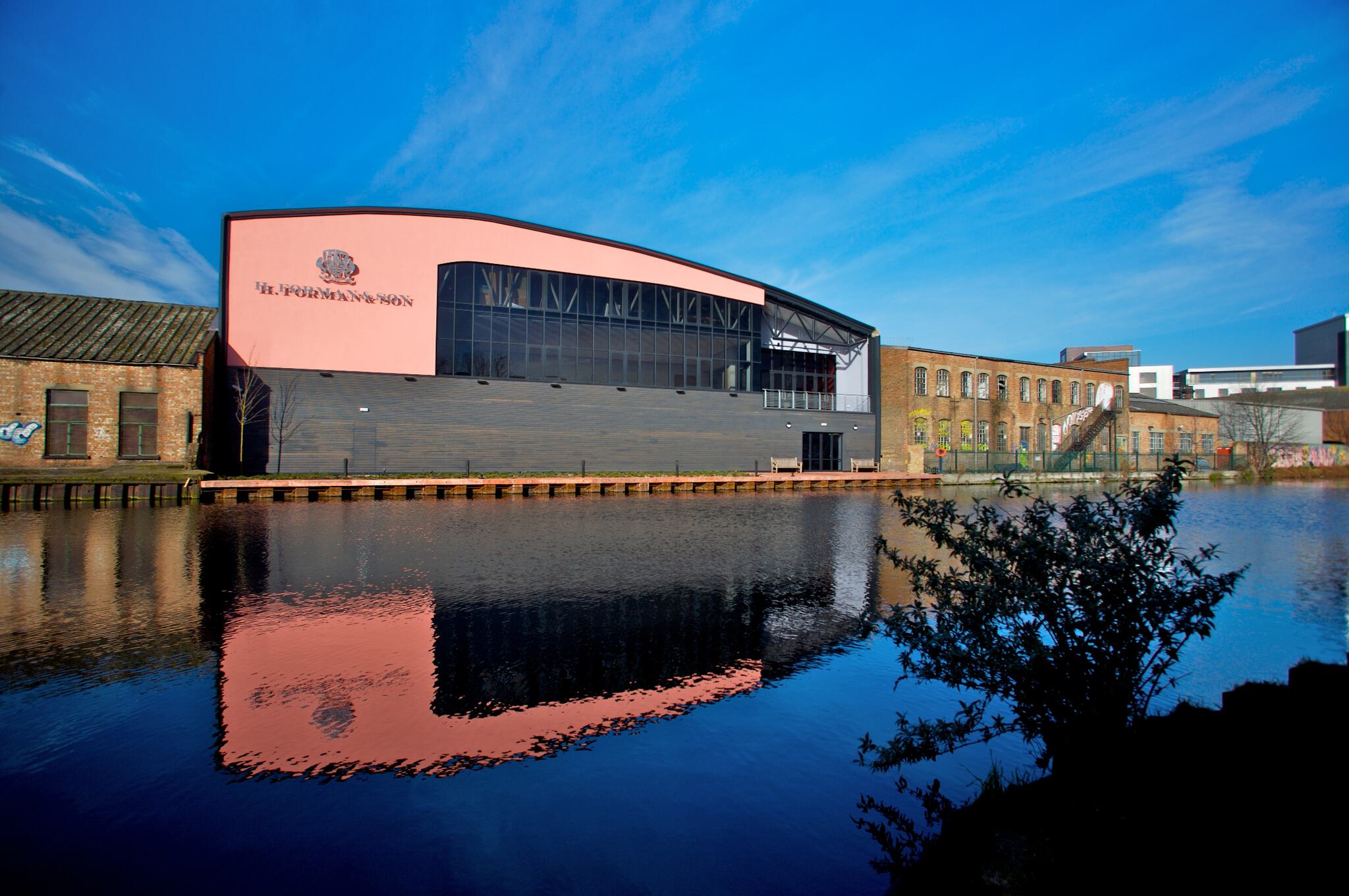 H Forman & Son’s headquarters: Designed to look like a fillet of salmon

The company is unusual in that it is at the same time artisan and quite large. Everything is still done by hand using Scottish fish, not Norwegian which takes four days to arrive and has lost its freshness by the time it does. He knows that he could drop his prices if they bought cheaper fish, used machines instead of people, but then his point of differentiation is gone forever. He notes that this is what all the London cure smoke houses did and they have all gone.

In terms of turnover, 80% of revenue is wholesale and 20% is direct to consumer. The company has broadened out into other foods after chefs asked for it but its reputation is based on, and 80% of what it sells is still, smoked salmon. He acknowledges that H Forman & Son has an advantage in being in London as consumers are more aware and high-end shops such as Harrods and Selfridges will stock his products as the demand is there.

Of the wholesale market, half goes to shops and half to restaurants. The online operation is growing steadily but production reaches full capacity at peak times such as Christmas. H Forman & Son must be the only company producing smoked salmon to stop taking online orders two weeks before Christmas. But it’s not the kind of business that can suddenly take on more hands to cope with surges in demand. It is, however, a price worth paying for Forman to ensure that his products are consistently the best.

In terms of the future, there is a delicatessen on site ready to go which will add to the very successful restaurant already operating on Fish Island. And product development is constantly ongoing – smoked salmon jerky is a recent popular addition. Part of H Forman & Son’s great skill is recognising that in such a high-end product it is possible to gain ever more niche revenue streams.

Three years ago they surveyed their consumer base about their preferences on which part of the salmon they preferred (the bottom is more moist and fatty, the top leaner and drier). Consumers can now pay a 5% premium on the price to choose which part they wish to purchase.

And finally of course there is the Royal Fillet – an imperial cut no one had previously heard of in the UK – a version of which H Forman & Son created in advance of Harry and Meghan’s wedding and which was picked up by Waitrose. Just one more example, if it were needed, of how to reinvent one base product over and over again. Genius.